event in Orea Hotel Pyramida, Prague. It was the first of its kind held in the Czech Republic. The event brought innovation and entrepreneurship in the Visegrád Group (V4 region). The goal was created new apps in one of four categories just in 24 hours. Teams had available a tool-set to quickly create and refine prototypes, and cloud-based data storage to help collect, analyze and share IoT data. There were tech-experts (mentors) which supported teams during the contest. 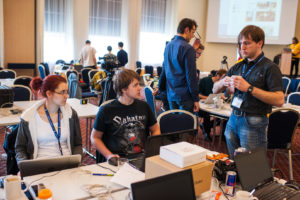 The event drew 60 contestants from across the Visegrad 4 region. In addition to the Grand Prize, the following teams and members took home prizes out of the 8 participating teams and 8 apps developed at the event: 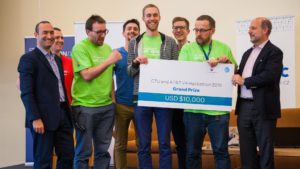 Team Babble won the US$10,000 grand prize. The winning app introduces and connects people located in the same area – like at a concert or on a train. Team Babble will also receive mentoring from Credo Ventures and Y Soft Ventures.
Second Place and Best Use of Open Source: Team DameMatiku’s developed app enables crowdsourced education video content in local languages. The team won US$2,000 for second place and another US$1,000 from Czech Domain Name Registry (CZ.NIC) for best use of open source. They will also receive mentoring from Y Soft Ventures.
Third Place: Team We Love Beer for their app that helps parents track/notify the location of their children. The team won US$1,000 and mentoring from Y Soft Ventures.
Best Use of the Czech Republic’s Open Data: Team OPENAir won US$1,000 for using the Czech government’s open data in their app that provides alerts on air quality.

In addition, 5 contestants also each received US$2,000 worth of online Nanodegree courses from AT&T and Udacity.

You can find photos from the event in the gallery.

Registration to AT&T Hackathon 2019 is open

Looking back to Junior Hackathon 2018